Why You Should Build Your Media System Like a Data Center

As a Networking Solutions Architect, I design new SDI and IP media systems every day, often leveraging the best of both worlds to satisfy each operational need. It is my job to understand the benefits of each solution. While the benefits of using an SDI core for a system composed of SDI edge devices are broadly understood ― with familiarity being at the fore ― we don’t hear much about the benefits media organizations gain by using the same technology powering today’s data centers. But we should!

Enabling horizontal and vertical scaling of systems was always a clear and widely recognized goal in the development of the SMPTE ST 2110 standards suite. Less well-known, though surely also a priority, was the goal of leveraging the latest COTS IP technologies from IT leaders such as Cisco, Arista, and HPE to realize the added efficiency and density benefits they deliver.

I sat down to do some calculations for a recent project, and even I was surprised by what I found. When you look beyond the matter of sheer scale, you find that ST 2110 and data center-grade technologies open the door to many other interesting possibilities, with real implications not only for reduced operational expenses but also for running a greener business with greater capacity to adapt and grow.

The most notable benefit of a COTS IP infrastructure is cost reduction as a result of power savings, which translates to a significantly reduced environmental impact. While supporting the same live production experience as legacy SDI, the COTS IP model makes it easier to move toward “carbon neutral” status.

When you reduce power consumption to this extent, you also reduce facility cooling requirements and the stress that heat puts on infrastructure. 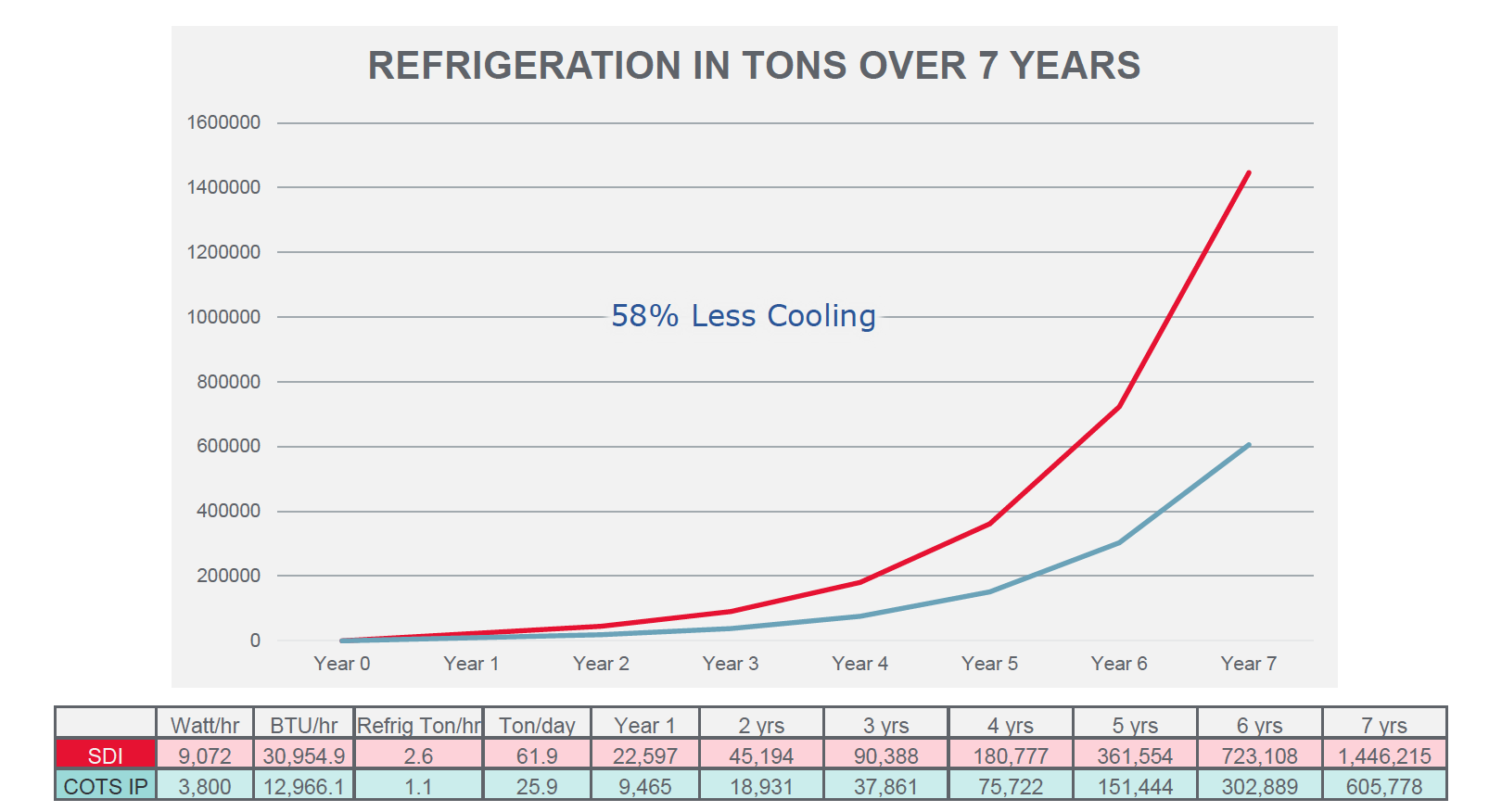 Collapsing and Cleaning Up the Physical Architecture

Power savings aren’t the only impressive metric. Across a glass-to-glass HDR workflow, for example, an ST 2110 infrastructure built on COTS IP technology can deliver valuable efficiencies by eliminating various processing devices — including electrical/optical (coax to fiber) conversion devices — and associated cabling typical of the SDI signal flow between camera and HDR monitor.

Between the truck dock and remote HDR monitor, a shift to ST 2110 (a multicast world) and PTP-based synchronization eliminates the need for conversion devices, distribution amplifiers, and other processing devices, thereby simplifying the signal flow, reducing potential points of failure, and lowering both the time and cost of system maintenance. With in-band PTP, with PTP on every audio, video, and data packet, you no longer need a separate, parallel, timing/synchronization reference architecture — and you get creation dates that make alignment and editing easier.

A cleaner, simpler signal flow is great, but improved rack utilization is one of my favorite things about moving from SDI to ST 2110 with a COTS IP core. Why? Check out these numbers! The common 512x512 router mentioned earlier fills 29 RU, while the “equivalent” COTS core only needs 2 RU and still has plenty of capacity for growth. So, in addition to getting the equivalent of the SDI 512x512 3G matrix in a fraction of the 2-RU COTS switch, the operator gets another 40 RU of a standard 42-RU rack for future growth. The density of the COTS solution yields massive space and power savings, even using the maximum load or worst-case expectations.

If you were to try to match capacity using two 29-RU routers, connected via tie-lines of any kind, you’d need to create a blocking system, without total availability of all your signals. We’ve lived with this model for years, but today we can achieve 1,280 UHD x 1,280 UHD in a 2-RU COTS core. Kick that capacity up to 5,120x5,120 3G HD router and try to match SDI to the COTS IP core, and the SDI solution is at least 10 29-RU frames for 290 RU. The COTS IP core: 2 RU. And while those 10 SDI routers may match in terms of capacity, it’s impossible to create a shared non-blocking matrix across those 10 frames. 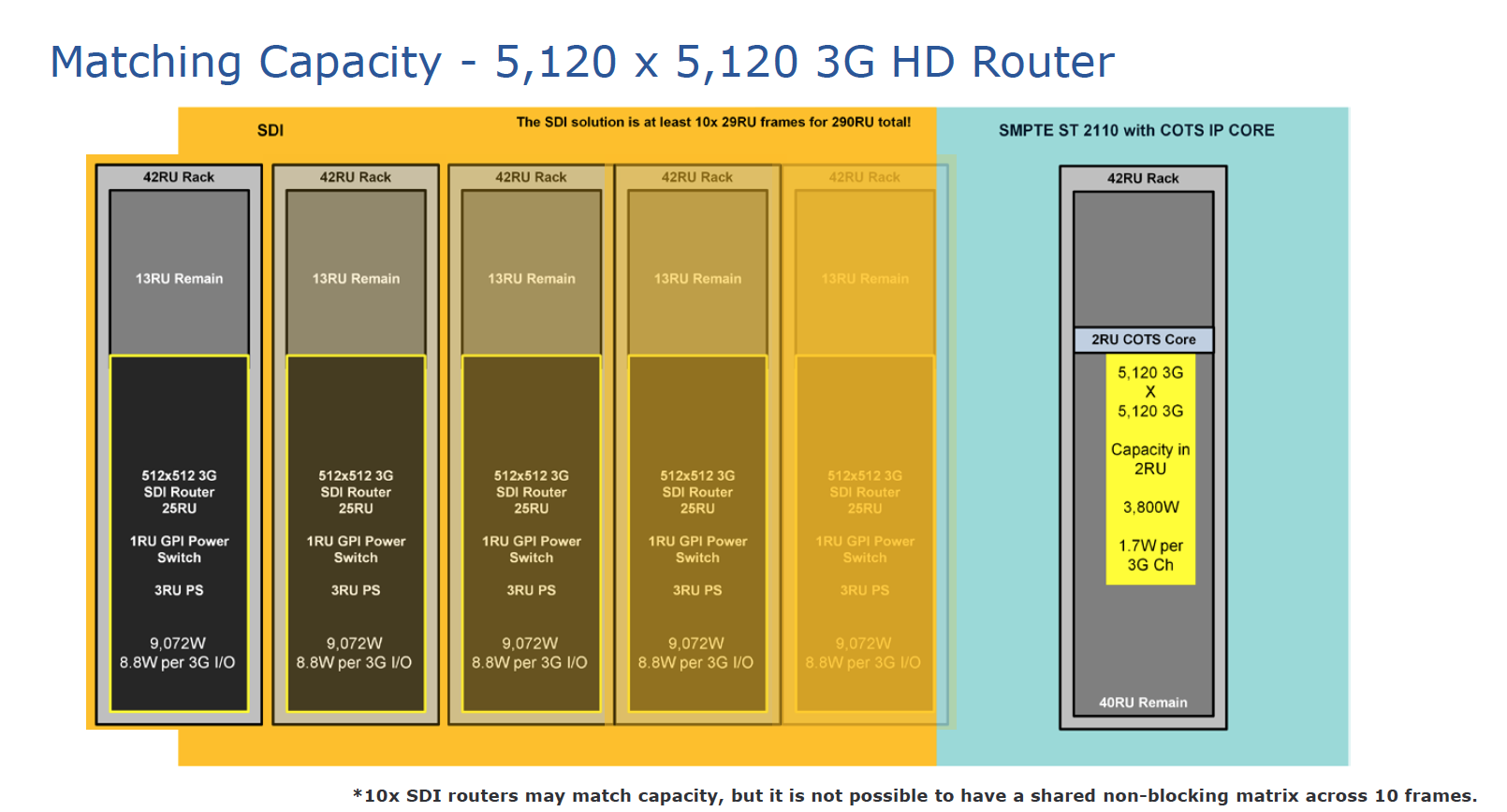 So, how big can you go in ST 2110 with COTS IP? In the 42-RU rack described earlier, you could put a 29-RU COTS switch frame with 16 slots for linecards, each with 36 100G ports, for a grand total of 576 100G ports and a capacity of 18,432 3G channels (requiring just 1.19 W per channel for unidirectional devices) or 4,608 12G/UHD channels. Scaling up non-blocking fabrics will become easier and easier as enterprise-grade switch suppliers inevitably increase from 100G and 400G ports to 800G ports in a similar form factor.

Extreme density gives you the option of connecting more physical devices, and even adding UHD and high-frame-rate (HFR) media at any time. The much smaller footprint of IP technology also allows for geographic distribution of resources, maybe even for carry-cases, with numerous connected devices acting as a single large router.

While many media organizations will continue to use SDI solutions, maybe the specific pieces of equipment each operator is most familiar with, those solutions will become more difficult to maintain and replace in coming years. When we say “best of breed,” we could be talking about the best cameras regardless of SDI or IP, uncompressed or JPEG XS, and mixed systems like this come together every day. Meanwhile, COTS IP technology will continue to advance rapidly, bringing media organizations — and businesses in a host of other markets and verticals — the benefit of innovation by leading IT system suppliers, some with R&D budgets larger than all the ad revenue of the broadcast industry combined.

With its requirements for sustained bandwidth and zero downtime, the media industry has actually provided an excellent test bed for new technologies and stress testing. Now, in addition to powering data centers around the world, COTS IP technology supports the most demanding live production environments — and the biggest moments in live news, sports, and entertainment. It can do the same for your operations, offering opportunity for more efficient, agile, earth-friendly, and profitable operations.

The remarkable horsepower supplied by IP and the flexibility afforded by SMPTE ST 2110 allow media organizations to move beyond emulation of legacy systems. ST 2110 has been proven in live production and 24/7/365 broadcast systems since 2018. As the industry grows increasingly comfortable with IP, ST 2110 COTS IP solutions will provide the foundation for even greater creativity in producing and delivering media experiences to consumers.

Since the ratification of the SMPTE ST 2110 standard, Cassidy has specialized in SDI, IP, and hybrid video systems using the standard for live events, sports, broadcast media, and distributed campuses.

Emerging immersive audio is now firmly on SMPTE's agenda. In an overview of the activities being undertaken by the newly established Technology Committee on Digital Sound... END_OF_DOCUMENT_TOKEN_TO_BE_REPLACED

“If you can’t find it, it’s not worth a damn thing”

Thus spoke Darryl Jefferson, responsible for the incredibly successful US Olympics coverage at NBCUniversal, at the SMPTE industry lunch on 23 October 2012.    His reference... END_OF_DOCUMENT_TOKEN_TO_BE_REPLACED
Featured
|

The Nuances of Building IP-Based Systems