SMPTE Technology Committees are charged with developing engineering documents and reviewing existing standards documents to ensure that they are current with established global practices and are compatible. Each quarter the Technology Committees (TCs) and subgroups convene to fulfill this charge. Join Alan Lambshead and Howard Lukk as they summarize the outcomes and progress made during the September 2017 meetings of the TC held in London and hosted by Sky UK. 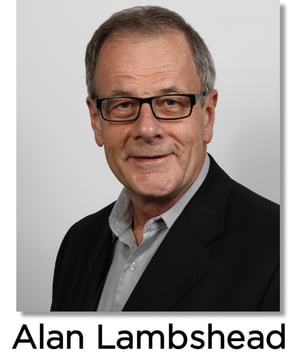 Alan Lambshead retired in June 2013 from a career with Evertz Microsystems Ltd. in Burlington that spanned 34 years.  In his most recent role as Vice President, Engineering his responsibilities included the general oversight of R & D and product development, focusing on Time Code and Post Production products. Alan’s leadership contributed to Evertz receiving the Philo T. Farnsworth Emmy in 2008; an industry recognition of Evertz’ significant contribution to television engineering.

Alan was instrumental in developing the first commercial devices for tracking film barcodes in the film to tape transfer suites of Hollywood and developing the end to end systems that enabled the widespread deployment of KeyKode throughout the world.  This work was responsible for Evertz receiving an Emmy Engineering award in 1994 for its work on advancing KeyKode Technology.  Alan is co-inventor of ‘3-line VITC’ and ‘Film Transfer Metadata’, both of which have been standardized by SMPTE.  He pioneered the encoding of Film Transfer metadata into 1080p/24 High Definition video and has worked with other manufacturers to advance this technology for 4:4:4 digital acquisition for feature films, receiving a personal credit for this work in Star Wars Episode III – Revenge of the Sith in 2005.  He led the Evertz team in the development of specialized HDTV products for 3DTV applications, and was involved in the development of Ultra HD products.

During most of his time at Evertz, Alan was an active member of SMPTE Technology committees.  He is the author of several SMPTE standards and recommended practices.  He served as co-chair of the 32NF Network and Facilities Architecture committee from 2010-2013.  Alan is a widely recognized expert in the field of HDTV time code and sync issues, HDTV production, HDTV Metadata and has presented papers at local sections and national conferences of SMPTE.

In 2013, Alan was elected to the position of SMPTE Standards Vice- President for 2014-15.  In this role, he provides overall leadership to the SMPTE standards development process.  As an elected officer of SMPTE, he is also a member of the SMPTE Executive committee and Board of Governors.

Alan graduated from McMaster University, Hamilton, Ontario with a B. Eng in Electrical Engineering in 1972 and became licensed as a Professional Engineer (P. Eng.) in Ontario in 1988.  Alan became a SMPTE Fellow in 2009, and is a member of the Toronto SMPTE section.

Howard Lukk is SMPTE’s director of standards and engineering. Lukk was formerly a writer and director at independent film production and management company Pannon Entertainment, where he has worked on short films and providing technical consulting and education for clients. His last short film, "Emma," was shot and finished in high-dynamic-range (HDR).

During two years as director of media systems at Pixar, Lukk was responsible for managing both the audiovisual engineering as well as the image mastering departments and the work of maintaining the recording, projection, and post-production systems and workflows supporting Pixar filmmakers. Before joining Pixar, Lukk held his first role with The Walt Disney Studios. As vice president of production technology for the studios, he focused on integrating a new digital cinema workflow throughout the company's global operations.

Lukk's early work with Disney built on his previous experience as director of technology at Digital Cinema Initiatives (DCI), where he was responsible for research and development, design, and documentation of a digital cinema system specification and test plan. Earlier, as chief engineer at International Video Conversions, Lukk worked with engineering staff to design, build, and maintain a high-end post-production facility specializing in digital cinema, telecine transfer, audio post, and standards conversion work.

A SMPTE Fellow, Lukk has served the Society in numerous volunteer roles including Technology Committee co-chair, Working Group chair, document editor; and also director of the "Moving Images" documentary project. He has served as an advisor to the Board of Governors as an appointed standards director. In the latter role, Lukk has acted as one of the Society's key spokespeople with the entertainment industry, press, and public in matters relating to its standards efforts.