After years of anticipation and many impressive demonstrations, commercial laser-illuminated projectors are being sold and installed in commercial movie theaters and premium large format (PLF) theaters.

After years of anticipation and many impressive demonstrations, commercial laser-illuminated projectors are being sold and installed in commercial movie theaters and premium large format (PLF) theaters. Systems with brightness levels ranging from 6000 cinema lumens to over 100,000 lumens per screen (dual-projector) have been installed. This webcast steps through key terms and definitions; current commercial offerings; major system architectures; the impact of primary selection; RGB laser vs. Blue laser-Pumped Phosphor (BPP) and a tutorial on key "figures of merit" (FoM) for evaluating laser-illuminated projectors, such as brightness; brightness roll-off; lifetime; wall-plug efficiency; speckle contrast ratio; dynamic range; contrast ratio; color gamut; impact on 3D; 6 Primary 3D systems and other laser-related topics will be discussed. Q&A during and after the talk will be an integral part of the session.
After registering, you will receive a confirmation email containing information about joining the webinar. 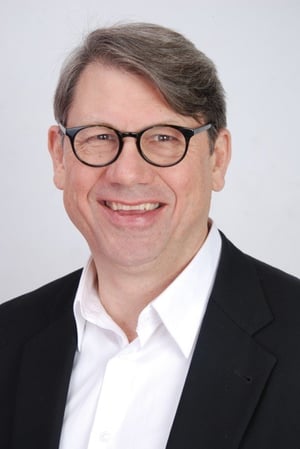 Bill Beck is Barco’s Laser Guy, supporting Digital Cinema and other business units in their development and commercialization of laser illumination technology. He will be one of the company’s key spokespersons for laser projection products, technology and new applications. Bill will represent Barco at the Laser Illuminated Projector Association (LIPA) and other laser related industry groups.

Bill has been a pioneer in laser projection since 2003, when he started planning the strategy and products for Laser Light Engines, his most recent start-up. He has extensive background in the laser requirements for Digital Cinema, Giant Screen, Theme Park, and Industrial applications of laser illumination for 2D and 3D projection and sensing. He is now an acknowledged domain expert in laser and fiberoptic technology for projection displays.

Before joining Barco, Bill Beck was founding CEO of Laser Light Engines; Co-founder of LIPA and President of BTM Consulting, LLC, as well as three fiberoptic start-ups. He has authored numerous papers, articles and talks on lasers and fiberoptics for projection displays and related applications.