A colleague and I had access to volumetric 3D displays and decided to try to make a motion picture to be exhibited in a public setting on such a device.

A colleague and I had access to volumetric 3D displays and decided to try to make a motion picture to be exhibited in a public setting on such a device. We hosted a month-long workshop with students from several universities to try out storytelling and visual ideas and to experiment with production and post-production processes. In this talk, I’ll describe what we’ve learned so far, as we head into the final production phase later this year 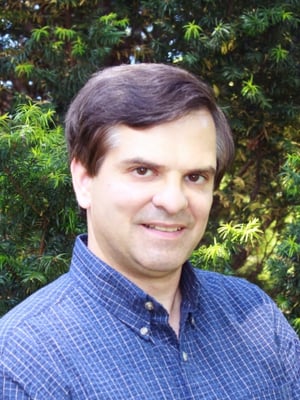 V. Michael Bove, Jr. holds an S.B.E.E., an S.M. in Visual Studies, and a Ph.D. in Media Technology, all from the Massachusetts Institute of Technology, where he is currently head of the Object-Based Media Group at the Media Lab, and directs the consumer electronics working group CE2.0. He is the author or co-author of over 100 journal or conference papers on digital television systems, video processing hardware/software design, multimedia, scene modeling, visual display technologies, and optics. He holds patents on inventions relating to video recording, hardcopy, interactive television, medical imaging, and holographic displays, and has been a member of several professional and government committees. He is co-author with the late Stephen A. Benton of the book Holographic Imaging (Wiley, 2008). He is on the Board of Editors of the SMPTE Motion Imaging Journal, and has served as Education Director for SMPTE. He served as general chair of the 2006 IEEE Consumer Communications and Networking Conference (CCNC'06) and co-chair of the 2012 International Symposium on Display Holography. Bove is a fellow of the SPIE and of the Institute for Innovation, Creativity, and Capital. He was a founder of and technical advisor to WatchPoint Media, Inc. and served as technical advisor to One Laptop Per Child (creators of the XO laptop for children in developing countries).