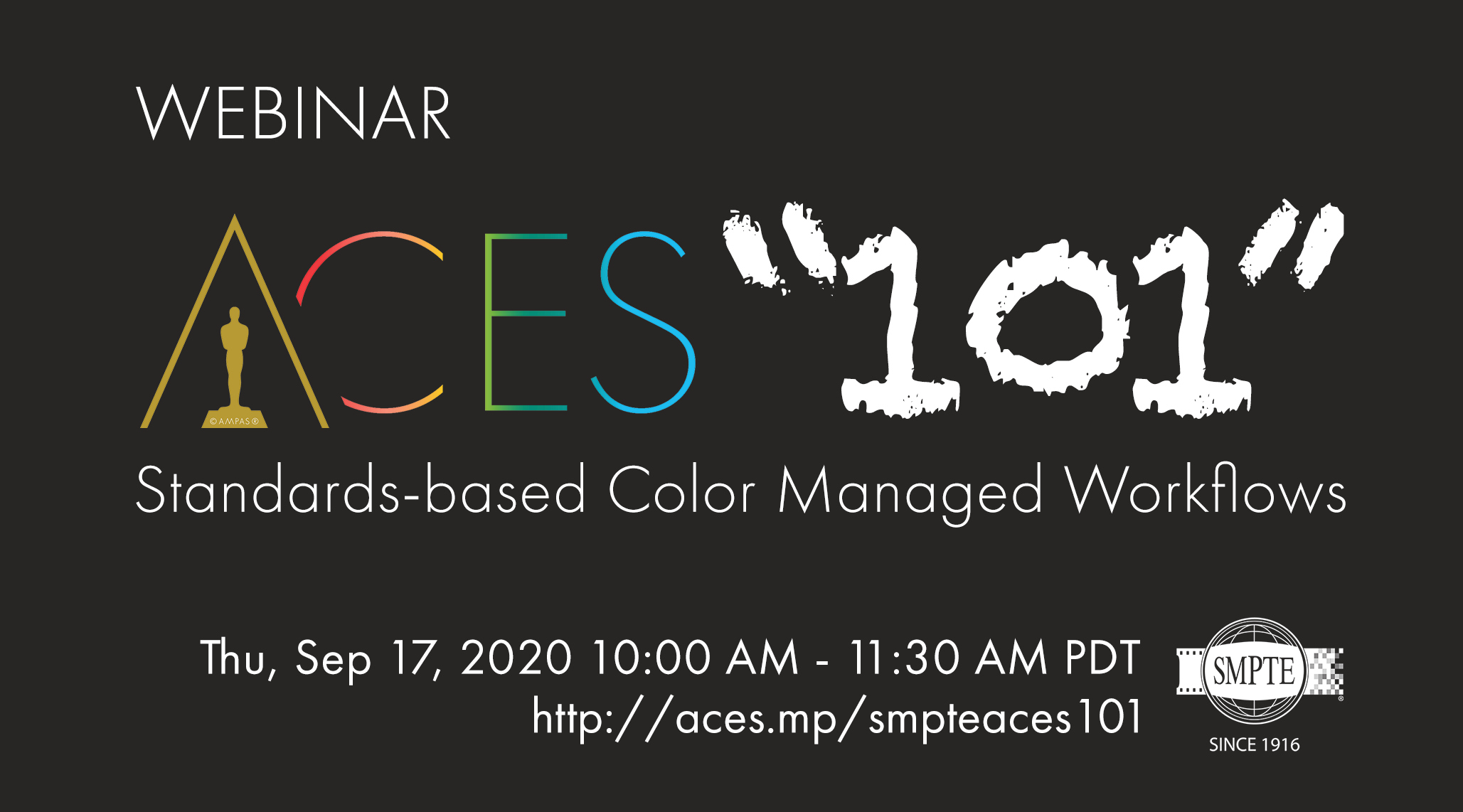 The widespread use of HDR in production and the demand for future-proof digital masters for delivery and archiving have increased the need for digital color management systems. The Academy Color Encoding System (ACES), is the only standards-based, end-to-end color management system that is non-proprietary and free to use. Join SMPTE Director of Education Joel E. Welch and Industry experts as they explain and discuss ACES fundamentals, applicable SMPTE standards, and how they can help you better design standards-based production equipment and workflows.

Anyone involved in creating or managing the color management chain for features, television, OTT or other ‘cine’ style or traditional broadcast productions. Product engineers, engineering managers, Independent professionals and those working in post and VFX facilities can all benefit from this seminar.

Topics to be covered Why is color management important, and why do standards matter? What is ACES, and what SMPTE standards apply? How is ACES implemented in production equipment and workflows? What are the future plans for ACES and its standards? Is ACES applicable for use in Broadcast/OTT How to learn more

Nick Shaw, from Antler Post (antlerpost.com) has been working in post-production, in the UK and internationally, for over 25 years. Having studied electronic engineering, he then worked as an editor, first in tape-based suites, and then on a range of non-linear systems. With the advent of digital cinema cameras, it became apparent that a host of new challenges had arisen, and that there was a need for people with an in depth understanding of image pipelines. With his sound technical background, and experience of post, Nick was ideally placed to cut through the jargon, and help people get the best out of the new technology. He has served as a technical book reviewer, and has written articles and manuals, and produced training videos on a range of subjects related to digital cinema. He is a member of one of the ACES Technical Advisory Councils, a Mentor on ACESCentral, and is also a contributor to the open-source Colour Science for Python project.
Guest Speaker:
Carol Alynn Payne

Carol Alynn Payne started her career in visual effects, working for almost six years at Industrial Light & Magic, a Lucasfilm Company, most prominently as Color & Imaging Engineer. It was there she found her passion - in how we capture, create, digitally manipulate, and display imagery to make content shine. At ILM, Carol worked on over 30 films, including The Irishman, Star Wars: The Last Jedi and Avengers: Infinity War. In May 2019, Carol joined Netflix as Imaging Specialist on the Creative Technology team, focused on standards of the future and how can we best utilize imaging technology to preserve creative intent. Carol is a Virtual Working Group chair for the Academy Color Encoding System (ACES), as well as a Technical Steering Committee member of OpenColorIO, and a chair of the Academy Software Foundation’s Diversity & Inclusion Working Group. Active in SMPTE and ACM SIGGRAPH, she's also a founding member of Women in Visual Effects.

Annie Chang  is the Vice President, Creative Technologies for Universal Pictures, responsible for developing strategies and designing innovative next-generation workflows across film and emerging immersive media experiences.  Prior to joining Universal Pictures, Chang was the VP, Technology for Marvel Studios and held various roles during more than a decade tenure at The Walt Disney Studios.  Chang is the AMPAS ACES Project Chair and Co-Chair of the AMPAS SciTech Council.  She has been a Co-Chair of the 10E Essence Technology and Chair of the Interoperable Master Format (IMF) Working Group at SMPTE.  She is an SMPTE Fellow and is a recipient of the SMPTE Workflow Systems Medal Award, Advanced Imaging Society’s Distinguished Leadership award and StudioDaily’s 2018 Exceptional Women in Production and Post.  In 2020, The Hollywood Reporter named Chang on their list of top “Hollywood Innovators.”

Alex Forsythe is Imaging Engineering Manager for the Academy of Motion Picture Arts and Sciences. He has served as the Technical Project Lead for ACES since 2006 and won a 2012 Primetime Emmy Engineering Award as part of the ACES team.  Prior to joining the Academy Alex worked for Intel Corporation in the New Business Initiatives Division and Eastman Kodak in the Imaging Science Division of the Research and Development Laboratories.  Alex holds BS and MS degrees from Rochester Institute of Technology.  He’s an active member of the SMPTE standard community and has served as document editor for numerous SMPTE specifications.  He’s currently a member of the US delegation for the ISO TC-36 Technical Advisory Group.