What is Immersive Audio and why is it so cool?

With all manners of entertainment using the moniker “immersive”, what does this mean with regard to audio? Since the introduction of immersive audio to the cinema, SMPTE has been working to create standards to foster interoperability between the many variations of playback systems and the many variations in mixing tools. A number of standards documents have been created that address different aspects of the problem.

This webcast will describe what immersive audio is, why it is so cool, and what makes it vital to the industry. We will take a deep dive into ST 2098-1, which defines immersive audio metadata, and is the first document in the suite of SMPTE immersive audio standards.

Please join us for this fascinating first webcast in a series dealing with immersive audio and related SMPTE Standards! ​

Standards Update Webcasts are FREE and open to all! 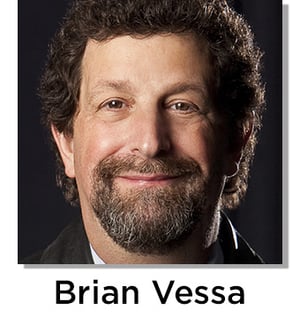 Brian Vessa is an accomplished audio professional with over 35 years of experience in the industry.   After attending UCLA Engineering School he became a recording engineer, producing albums and recording orchestras.  His passion was hot-rodding studio gear and discovering novel recording techniques.  Brian transitioned into film post as a music editor and sound editor, became a re-recording mixer at Cannon Films and MGM, and then handled audio restoration at NT Audio.  He was hired by Sony Pictures in 1998, and today is their Executive Director of Digital Audio Mastering and representative to DCI.

Brian is a member of the Academy Sound Branch, SMPTE and AES.  He was the founding chair of the SMPTE Technology Committee on Cinema Sound Systems, TC-25CSS, currently chairs D-Cinema and IMF sub-committees, and is a past chair of the DCI Technical Committee.  He has written many audio specifications, including immersive audio standards and a white paper on near-field mixing for home theater that has been widely adopted.

Brian enjoys recording jazz, rock and mixing live sound.  He is a drummer and keyboardist in the LA area, an avid backpacker and an award-winning home wine and beer maker.