For his service in visual effects as accomplished practitioner and master trainer. Steve’s specialization is in the digital domain, but he has long been an advocate for visual effects education in workflow for both film and digital intermediates. He has worked to perfect and to implement color management paradigms in compositing, cementing the place of film in digital post-production and promoting stronger understanding of film’s value in digital compositing. Steve has been a master visual effects trainer since 2005; his two books, "Compositing Visual Effects: Essential for the Aspiring Artist," and "Digital Compositing for Film and Video," are among the very few that actively instruct in film color science for digital intermediate and compositing. 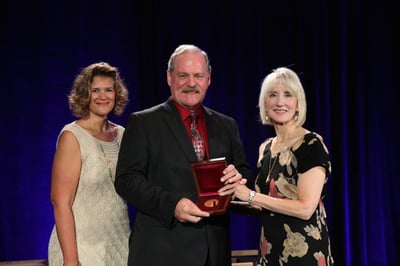 Steve has more than 20 years of production experience on over 70 feature films and nearly as many broadcast commercials. Since 2005 he has been a master trainer traveling around the world to over 25 studios conducting vfx compositing training with clients that include Disney, Pixar Animation and many more. Steve has also produced dozens of training videos for major vfx software companies such as The Foundry, Imagineer Systems, Red Giant, and YUVSoft. His training videos are featured on Lynda.com. Steve also mentors vfx students around the world with online training programs.

Steve is a Foundry certified Nuke Trainer and the Department Head of VFX Compositing for CG Spectrum’s College of Digital Arts & Animation, as well as a member of the Visual Effects Society (VES) and the Digital Cinema Society (DCS).

2013
Edward J. Giorgianni
For his contributions to color management and workflow innovation in motion picture through the digital intermediate and digital cinema eras.  Giorgianni has been instrumental in defining the basic conventions by which film integrates into digital workflows through Cineon color encoding specifications.  He has further been a principal architect of the Academy Color Encoding System permitting more seamless interchange of film, video and CG imagery for modern content delivery.  Giorgianni’s commitment to open dissemination of color and imaging science through his contribution to books, including his own co-authored with Thomas E. Madden, and to students at Rochester Institute of Technology where he is an adjunct professor fully reflects the spirit of the Kodak Education Award.

2012
William McDonald
For his dedication to student filmmakers striving to take advantage of the best of film and digital technologies.  During his tenure at UCLA, McDonald has advocated for affordable access to the best production and post-production resources for film students, negotiating services with Technicolor, Deluxe and FotoKem among others.  He was also instrumental in bringing the largest fiber-connected Final Cut Pro platform at the time to UCLA to modernize post-production teaching.   In addition, McDonald has innovated collaborative education with industry professionals through the UCLA Cinematography Residence Program where students learn directly from award winning professional cinematographers from the ASC.

2011
Linda J. Brown
For her commitment to teaching the art and science of cinematography to aspiring filmmakers of all backgrounds. In addition to her laudable work as a Director of Photography, Ms. Brown has committed herself to pushing professional standards in the educational arena at AFI and USC among others, insisting her students understand the technical details behind their media choices. She has also long championed equal opportunities for women and minority filmmakers and has actively engaged the professional community to recognize talent in all of its forms.

2010
Stephen Lighthill, ASC
For his lifetime commitment to sharing his broad experience and knowledge with future filmmakers. Mr. Lighthill is a talented and committed filmmaker whose body of work illuminates important chapters in our history, for today’s audiences and for posterity. He is also a tireless educator who has taught multiple generations about the importance of communication and collaboration in filmmaking.