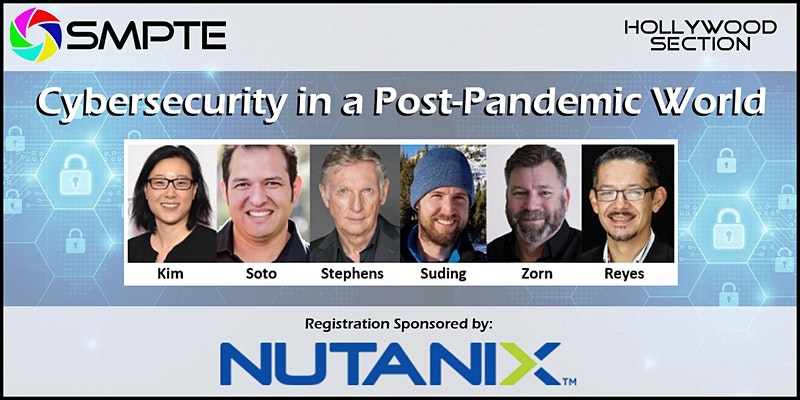 In a virtual meeting scheduled for March 2nd, SMPTE Hollywood will explore the challenges of cybersecurity in the post-pandemic world. A panel of security experts will discuss threats and vulnerabilities that have arisen due to the expansion of remote working and changes in production practices in the wake of covid—and offer advice on how to protect against them.

In the past, media production consisted of discrete phases with specialized contributors following a central workflow. But that is no longer true. Today, collaboration involves versatile contributors engaged in heavily branched pipelines. Security must adapt from fortifying discrete environments against attackers, to support safe collaboration among diverse parties and varying workflows throughout the production process. Join this panel of production and security experts to explore that major shift in thinking.

JoAnne Kim, Head of Production Technology, Amazon Studios, is a production and post-production technologist with experience in facility management and studio operations. Prior to joining Amazon this year, she spent four years at Legendary Entertainment as VP of Post-Production Technology. She has also senior technical positions with 20th Century Fox, Warner Bros. and G4 Media. Her experience encompasses feature film deliverables and mastering, post-production and broadcast engineering, editing and production. She holds a degree in visual communications and art from Mills College.

Spencer Stephens, Senior Vice President Production Technology and Security, MovieLabs, is engaged in projects on production technology and leads work in the security of production workflows. He was principal author of the MovieLabs “Securing the 2030 Vision” whitepaper and leads the work on the Common Security Architecture for Production (CSAP). CSAP is a zero-trust architecture designed for protecting workflows in the cloud but is also applicable to hybrid cloud infrastructure. Stephens previously operated a consultancy engaged in cybersecurity, production technology and cloud workflows. He served as CTO at Sony Pictures Entertainment, and managed the digital production group at Disney TV Animation and a post-production facility at Warner Bros.

Bret Suding, Digital Imaging Technician, is an independent production technician with experience across film, television and advertising production. He has been involved in projects with high security requirements for Apple, Google and other major brands. His television credits include Mythic Quest for Apple TV+ , Homecoming for Amazon and Our Flag Means Death for HBO.

Juan Reyes, Senior Director, Home Entertainment & Technology, Convergent Risks, Is a business and technical executive with more than 20 years of experience in the media and entertainment industry. A Trusted Partner Network (TPN) qualified assessor, he provides TPN security assessments, risk assessments and compliance services for motion picture, streaming and television content vendors around the world. He is an active member in many industry organizations including the Trusted Partner Network, SMPTE, Hollywood Professional Association and Media & Entertainment Services Alliance.

The panel is produced by Debra Kaufman, Juan Reyes and Marc Zorn.

Sign up to be notified about future SMPTE Hollywood Events: