Our December 9th, 2021 Ohio Section meeting was combined with the local Society of Broadcast Engineers-Chapter 52, and took place at the WCMH Television transmission plant in Columbus. Fifty members and guests saw and heard a chronological listing of the events leading up to and including their transmitter installation completion by Comark field staff, and WCMH engineers. Their new state of the art transmitter is now on the air with ATSC 1.0 VSB signaling but, easily convertible within half a day, to ATSC 3.0, including the required OFDM signaling. Ken McCrimmon, the WCMH Chief Engineer, began his slide presentation showing photos of the various phases involved with the successful installation leading to the project completion. Next Ken listed the many broadcast engineering firsts presented to the Columbus TV market over the years from their former call letters WLW-C (Channels 3 then 4) and later WCMH, including: first TV station on the air in Columbus, first NBC compatible color broadcast on January 1st, 1954 with the Tournament of Roses Parade, first WLW regional color broadcasts in August, 1957, first local origination color broadcasts in 1960, first Stereo audio NBC pass through and local origination broadcasts in July 1985, with the MLB All Star baseball game coverage from NBC. Ken then went on to mention that with his TV station’s new COMARK broadcast transmitter installation, WCMH now becomes future proof for many years to come!
The next guest speaker during the evening meeting was, Michael Smith the COMARK Customer service Field Engineer who presented a detailed breakdown of the many unique and advanced component and signal monitoring features, within their new transmitter. The meeting attendees then proceeded to the main transmission equipment room where Ken McCrimmon and Michael Smith gave the attendees a comprehensive demonstration of the displays available both locally, and via remote access, for all of the broadcast transmitter engineers’ monitoring, in helping to assure that their broadcast TV signals are on the air, and stay on the air! A lively Question & Answer session followed between the attendees and the transmitter engineering staff, prior to the meeting adjournment. 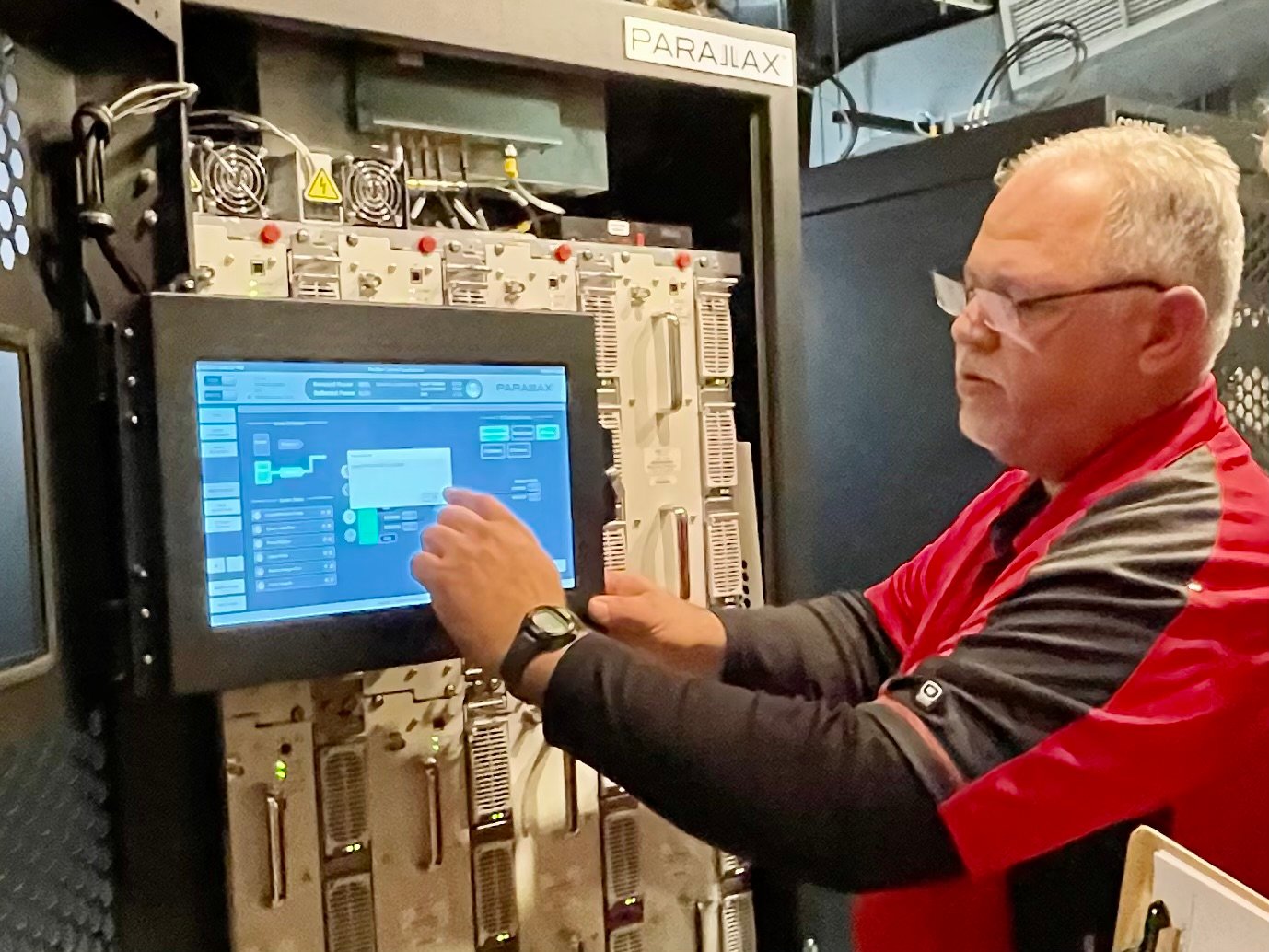 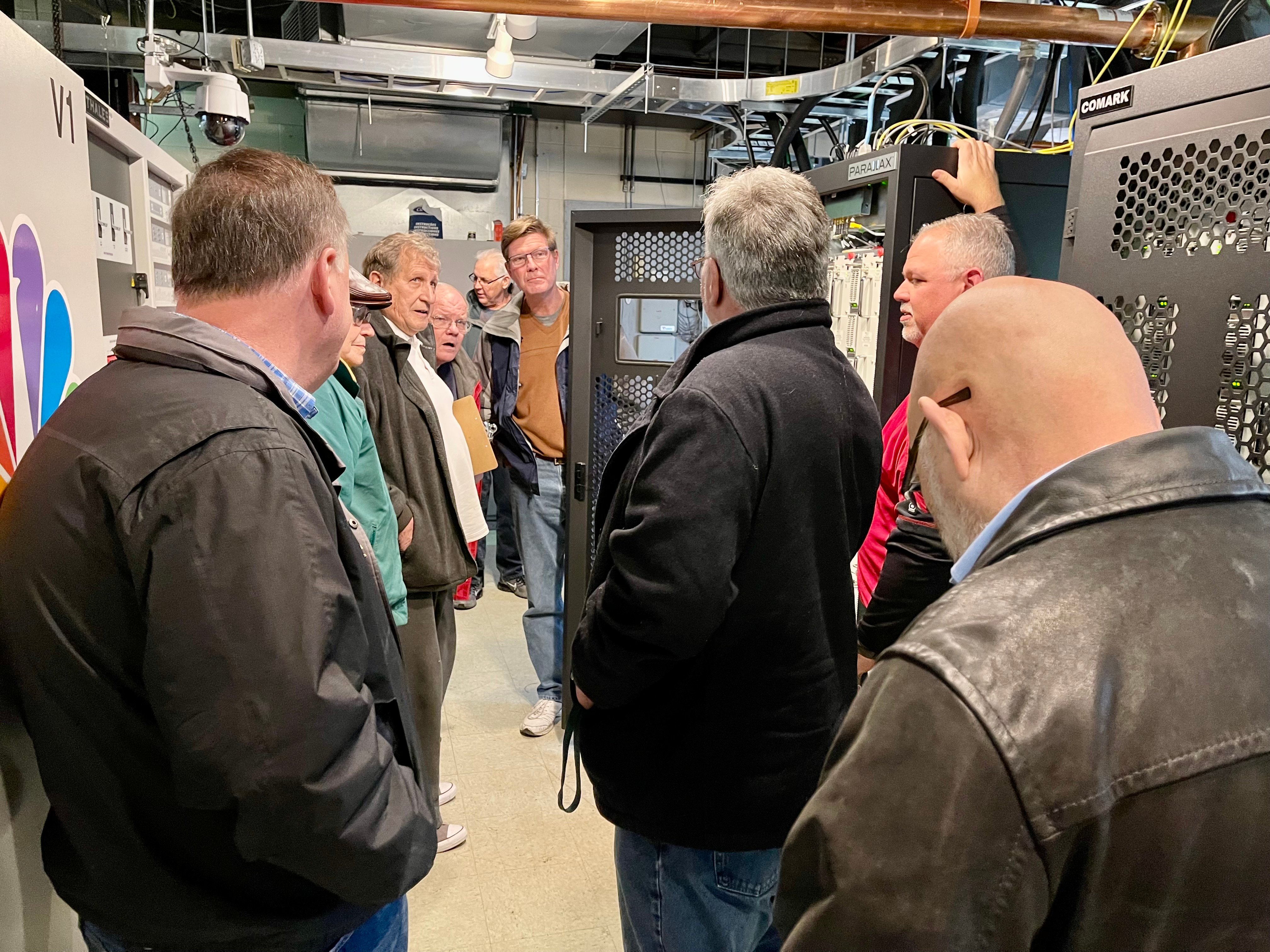 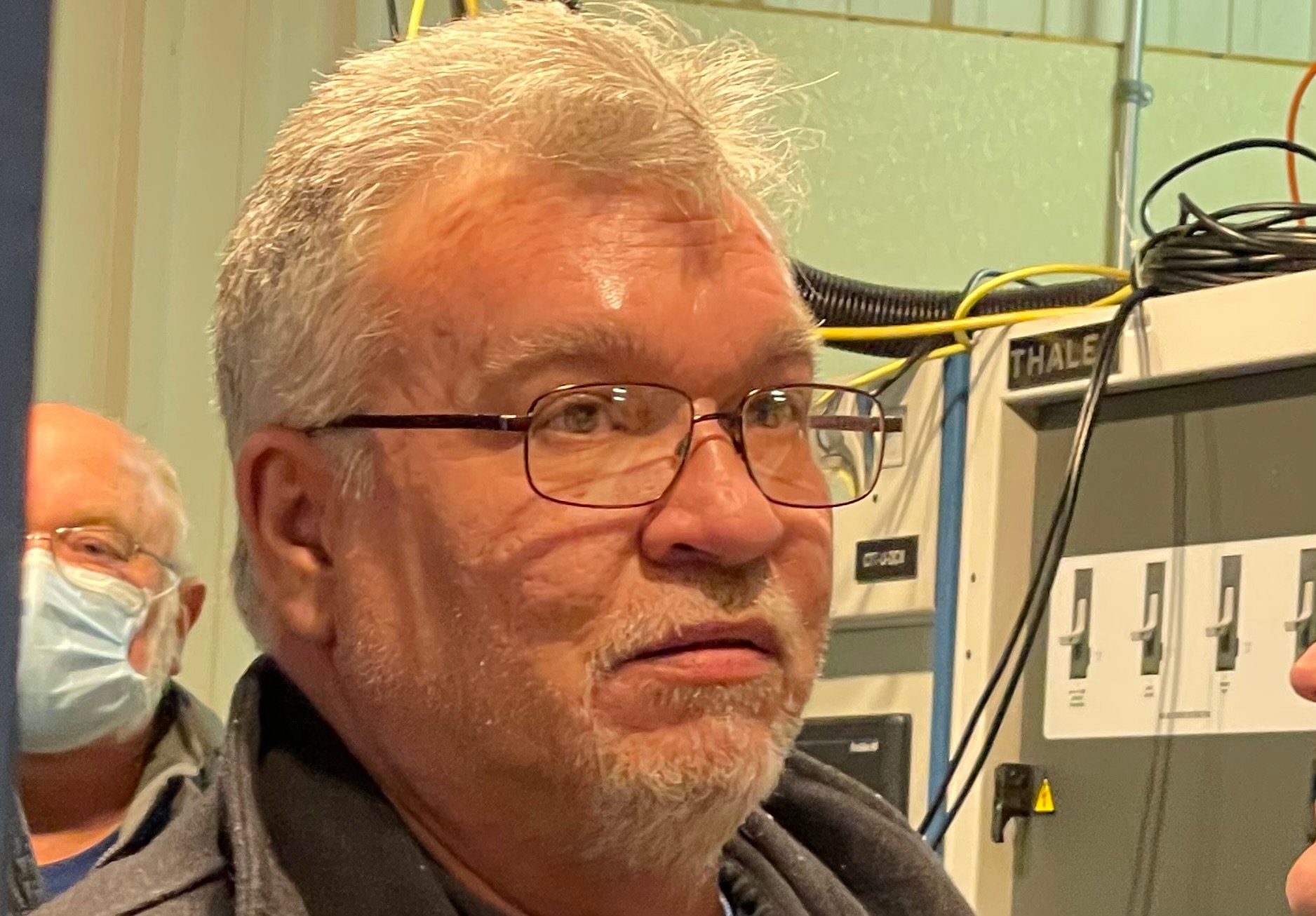 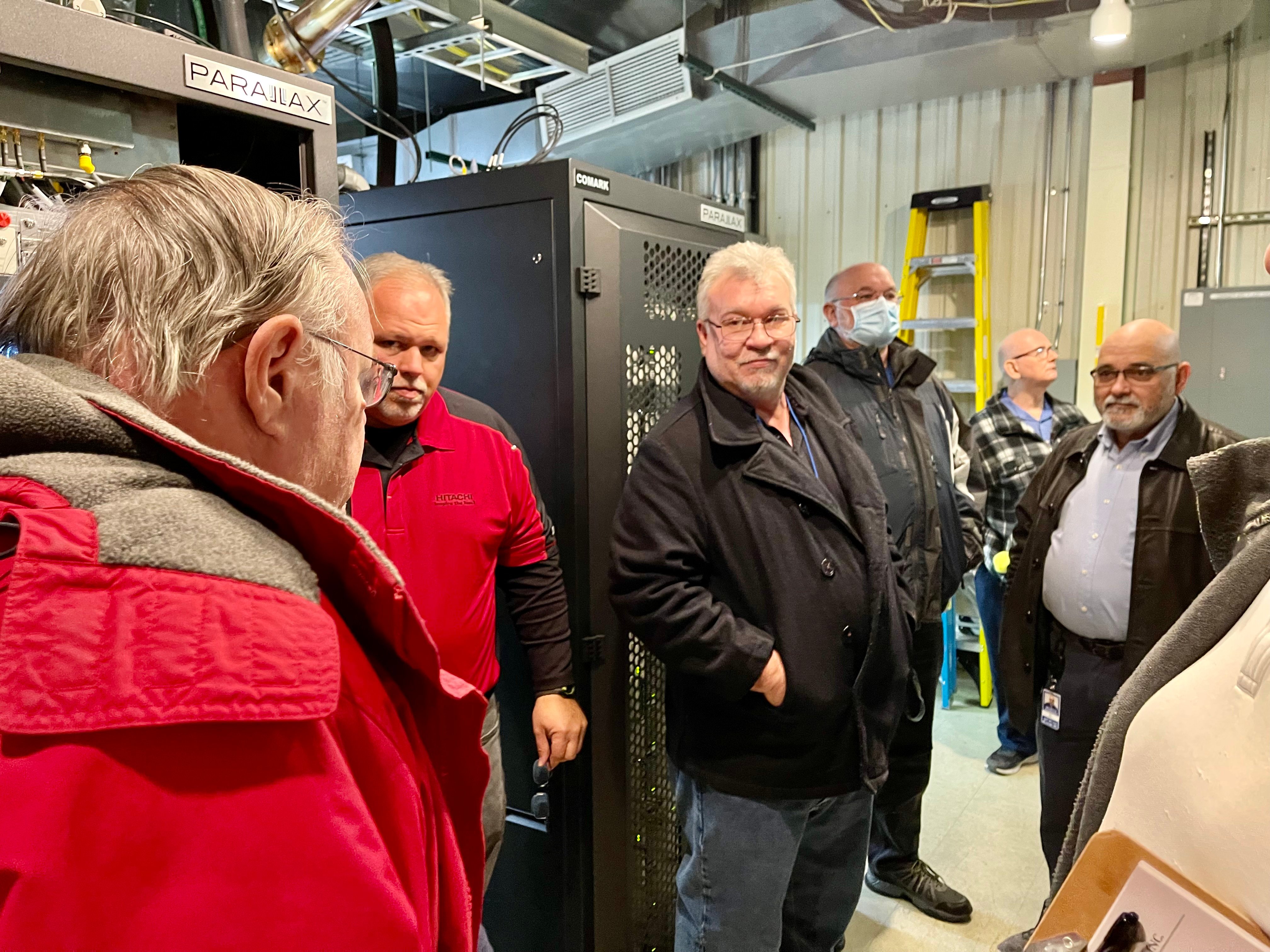 Our July 27th evening meeting was combined with the local SBE Chapter 52, and took place at the new Sinclair Broadcast Television transmitter plant in Columbus. Included within that plant are both ATSC 1.0 and ATSC 3.0 “Lighthouse” TV transmitters as well as Radio transmission operations. The ATSC 3.0 TV broadcast transmitter is radically different in that it uses the OFDM (Orthogonal Frequency Division Multiplexing) signal standard rather than the 1.0 Zenith 8 VSB type. On the air since January 7th, 2021, their new TV transmitter can accommodate/pass through up to five complete ATSC 3.0 stations’signals including those from other TV stations within the Columbus market, part of a temporary channel sharing arrangement scenario. The sole purpose of this “Lighthouse” TV station is to broadcast all of the Columbus area TV stations’ ATSC 3.0 signals for up to five years after first launching their 3.0 broadcasts. After that initial five-year period, each station will then continue their ATSC 3.0 Broadcast services from their own individual towers/antennas, etc. after shutting down their legacy ATSC 1.0 broadcast signal operations.

Ron Taylor and Mark Seekins of the local Sinclair Broadcast TV Engineering departments, went over the progress some of the area Columbus stations have made so far in preparing and implementing ATSC 3.0 broadcasts, as well as future plans for adding additionalfeatures within this new “wider pipeline”capabilty such as, network affiliate pass through and local origination of 4K video, Dolby Vision HDR, Dolby ATMOS immersive audio, higher frame rates, TV receiver internet interactions, to name a few. After their discussions, both Taylor and Seekins then conducted a comprehensive tour of the various transmitters and associated components within this truly futuristic, state of the art, “Lighthouse” TV transmission plant, one of few in the USA at this time! After a lively Q&A session, the meeting adjourned. 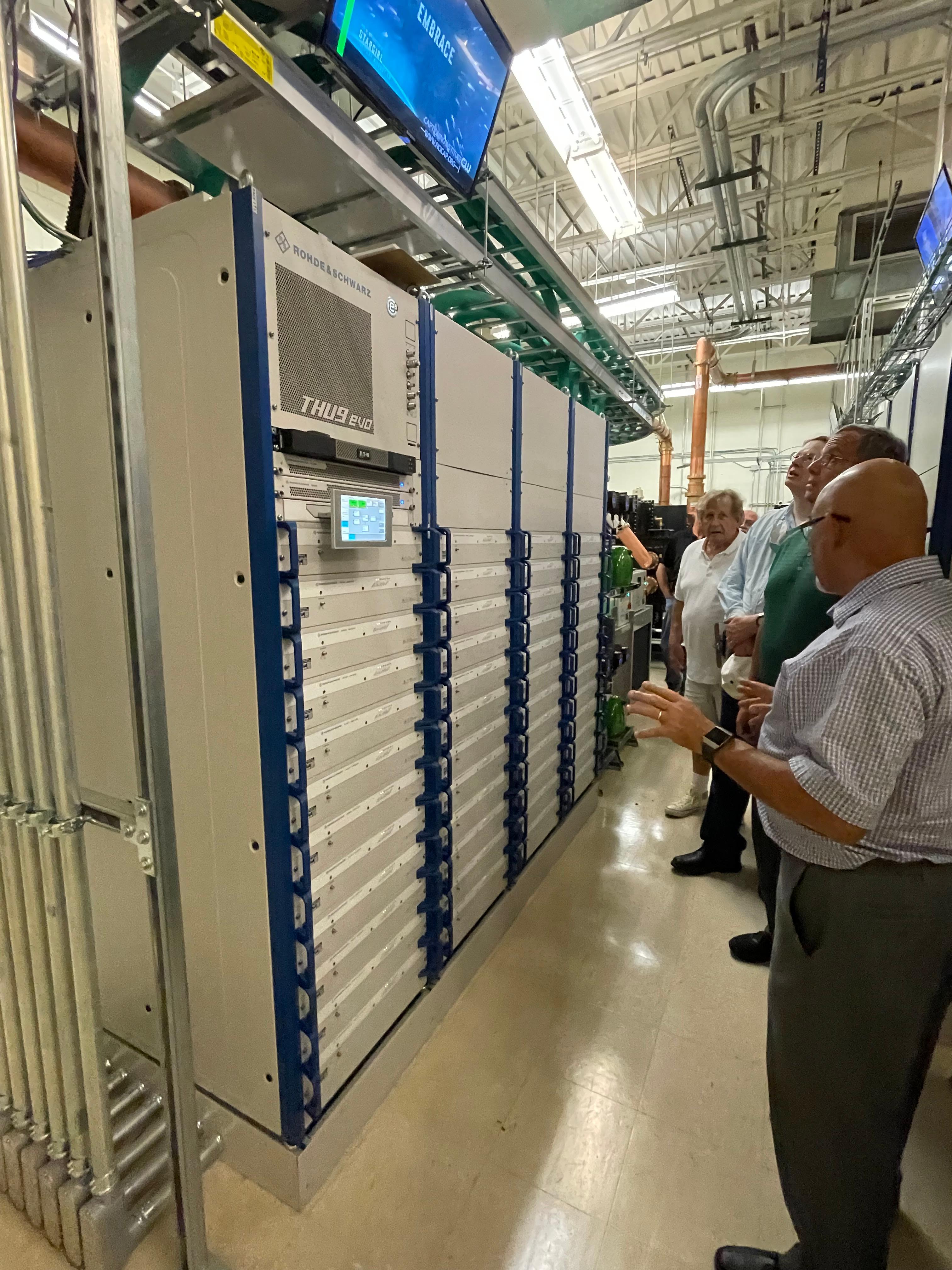 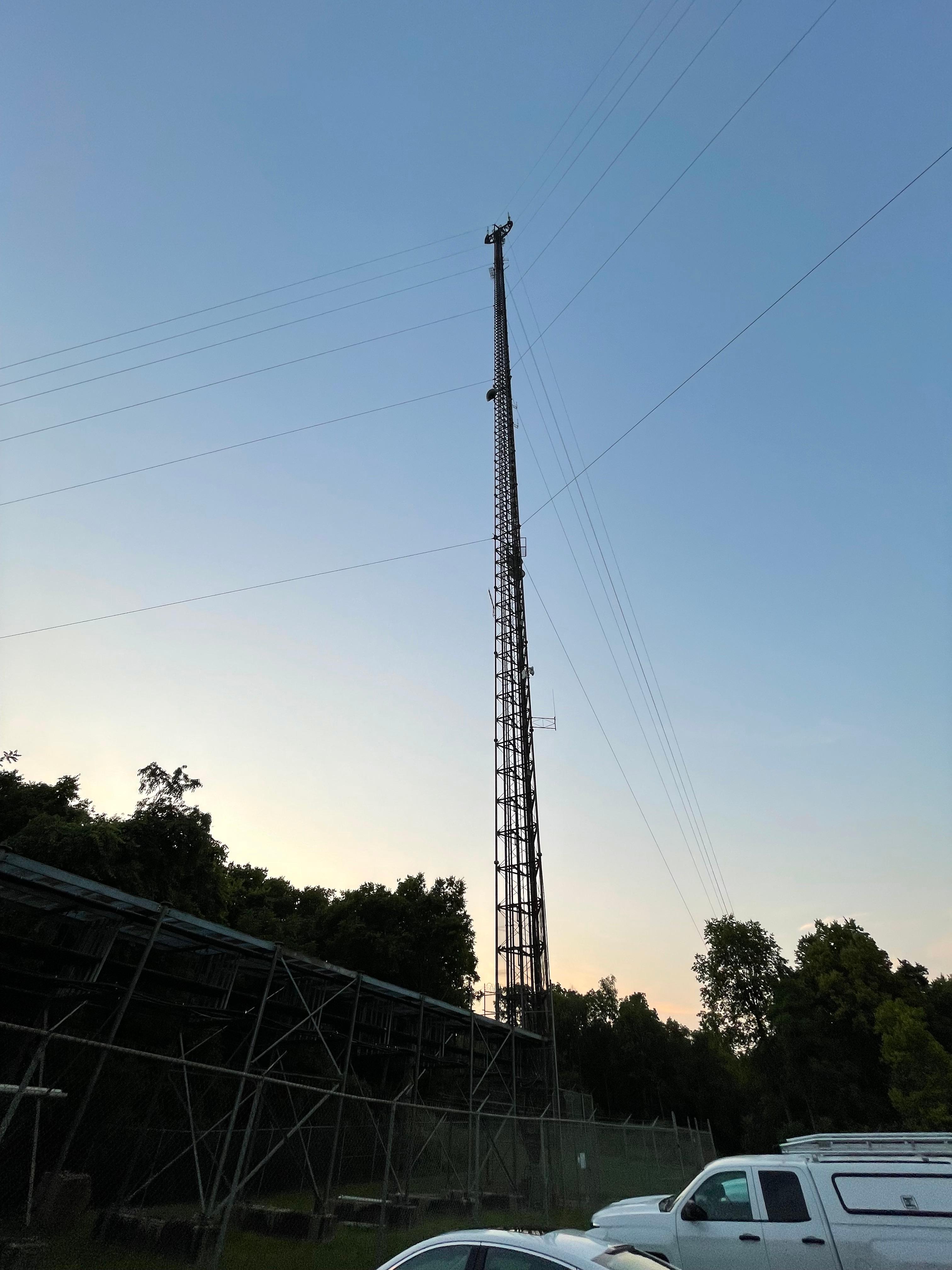 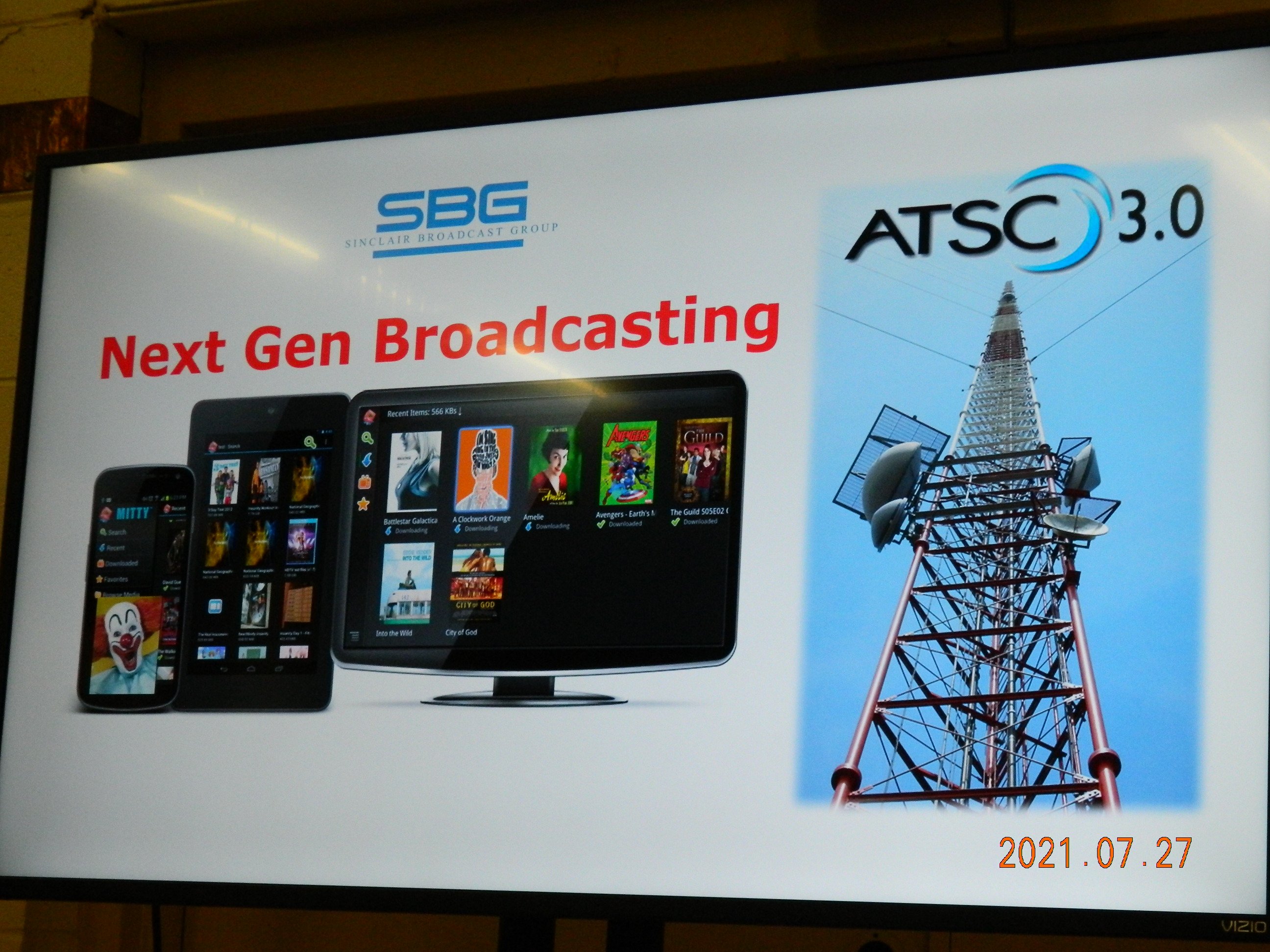 One of the slides presented during Ron Taylor’s presentation.

The October 24th, 2019 Section meeting took place along with the local SBE Chapter 52, at the WSYX-Sinclair Television lot in Columbus, with 40 members/guests in attendance. The guest speaker for the evening meeting was John Owen, the Ohio Section and SBE Chapter 52 Chairman, also with the firm Q Communications, LLC. His two part presentation first covered an overview/history of the Columbus Ohio TV station, WSYX-TV (former call letters WTVN-TV) now celebrating their 70 year anniversary within the Columbus TV market! That history included the “Channel 6” story including their red letter engineering events such as:

1) The launching of the first of several TV transmission plant locations.

2) The launching of their first network and local live color/studio facilities.

3) The transition to the two stereo audio formats.

4) The transition to Digital terrestrial broadcast service, to name a few.

The next part of Mr. Owen’s program covered an overview of his firm’s activities pertaining to the current national TV station “repacking” of various TV stations’ frequencies around the USA. He outlined the various technical and logistical issues that some TV stations have faced so far, in implementing such a massive national move to new spectrum frequency/channels, now mandated by the Federal Communications Commission, within each USA TV market! 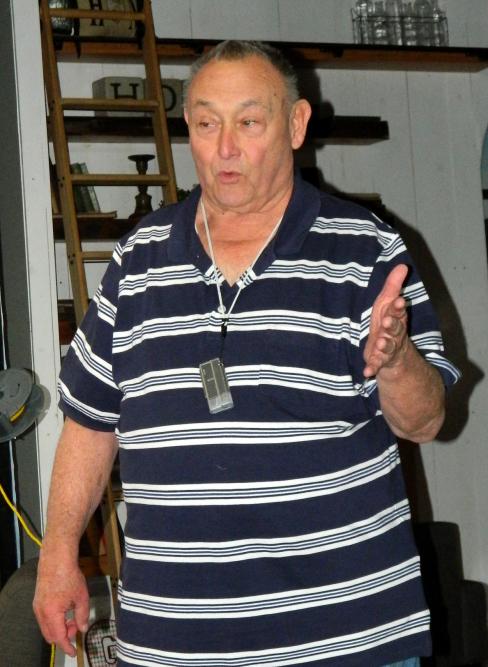 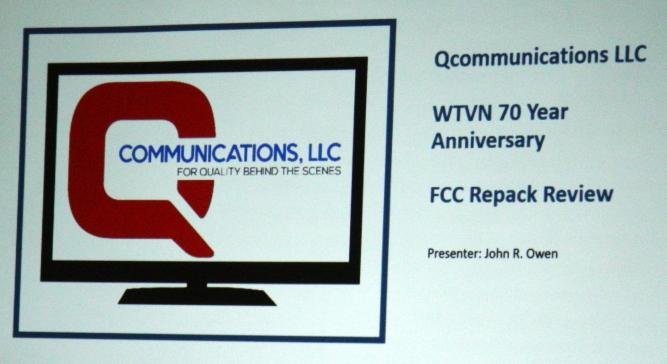 The May 30th, 2019 Ohio Section meeting was combined with the Central Ohio area SBE Chapter 52, and took place at the Mills-James production lot in Hilliard-Columbus, with approximately 45 members/guests in attendance. The principal guest speaker for the evening was, Terry Douds, a SMPTE Ohio Section Manager, and a broadcast operations supervisor for the WOUB/TV/AM/FM broadcast stations, affiliates of PBS, located at the Ohio University in Athens Ohio. Terry began his evening presentation with a summary of the conferences and displays at the recent NAB Conference/show in Las Vegas, NV. by using photo and power point slides. He also outlined a presentation he gave at that NAB event related to Immersive audio technologies, which he was also a member of the standards committee which helped shape/establish those standards for the next generation ATSC 3.0 broadcasts. Next he went over the local Columbus area TV stations’ projected ATSC 3.0 launching time tables and schedules, which now shows the first two Columbus TV stations to finish their repacking  activities this year and then launch actual ATSC 3.0 signals, etc. will be WTTE and WSYX. Mr. Douds then went over some of the added considerations that a local ATSC 3.0 TV broadcaster will likely encounter when launching such an an advanced Multi faceted Terrestrial broadcasting service, in the future. He pointed out that the new time table for a consumer in the USA to be able to go out and purchase one of the new/future ATSC 3.0 TV sets, now indicates that it will be around the time of the next Consumer Electronics show, scheduled for this coming January 2020! One of the first national network sports broadcasts here in the US after that launching, will be the 2020 Olympics coverage beginning in July, 2020, from Tokyo, Japan! 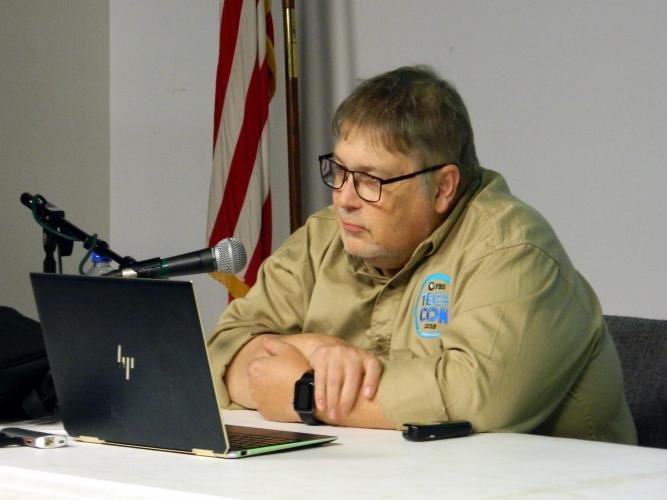 Terry Douds, WOUB/TV/AM/FM, and a SMPTE Ohio Section Manager, presenting at the May 30th, 2019 meeting.

The February 21st evening Ohio section meeting was combined with the local SBE Chapter 52, and held at the WBNS Digital Television plant in Columbus. 40 members/guests were in attendance to hear guest speaker, Terry Douds, Engineering Operations Supervisor for the Public Broadcasting TV station in Athens, Ohio, WOUB-TV, and who also teaches classes in Audio production at the Ohio University. Terry represents PBS on the S34-2, audio subcommittee for the ATSC 3.0 next generation broadcasting television standard, which considered and finally selected two immersive audio broadcasting standards from the various candidate standards submitted from firms around the world.

Terry's began his presentation by defining the term "immersive audio" and going over the many "audio object" isolation enhancements made possible with several new technologies such as, Dolby ATMOS and MPEH H. This includes a ceiling surround speakers type layout called 7.1 plus 4" and results in a unique "sound objects" isolation environment for the audio observer, as never before! He mentioned that past legacy audio broadcasting systems essentially just distributed general "audio channels" with limited sound fields of perception for the listener. For future legacy TV set viewers/listeners receiving the new immersive audio broadcasts with just a reduced number of speakers, etc, they too can experience a great benefit due to the backward compatible features of Dolby ATMOS and MPEG-H technologies.

He went on to outline some of the various activities involved in the committee's audio standards work which lead to the final selections from both the USA, and around the world. For the USA, the final selection eventually went to Dolby ATMOS, and for the remainder of the world,  it went to MPEG-H. He emphasized how these audio sub-committee selections went forward only after very careful and detailed considerations were made involving frank and in some instances very intense, discussions between all of the interested parties!

He also pointed out how the corresponding next generation ATSC 3.0 Television receiving sets' tuners will actually be able to pass through both types of immersive audio standards signals, Dolby ATMOS and MPGEG-H, depending upon which country or market locality the receiving TV set viewer/listener happens to be located in.

Our December 6th, 2018 evening section meeting was combined with the local SBE Chapter 52, and held at the Sinclair Television broadcast plant (WSYX/WTTE-DT) in Columbus. The guest presenter for the evening was Jay Dill, with the firm McFadden Audio Consulting and Design, located in Westerville Ohio. His principal presentation topics covered the various "after actions" necessary for the current/future TV broadcast spectrum "white space" users, especially for wireless microphones operators (both commercial and non-commercial) located in any given area, as all of the local market TV stations have completed their respective frequency relocation activities, part of the current 39 month US Congressionally mandated TV Broadcast spectrum repack window. This will dramatically affect all "white space" TV spectrum users in the USA due to the necessity of most wireless microphone operators/users needs of replacing them all with new ones then transmitting on different frequencies, due to that mandated frequency allocation window.

This will mean that the free open "white spaces" portion of the TV Broadcast spectrum available today in any given local TV broadcast market, will not likely be available tomorrow, along with little or no notice to be given to the end user! Mr. Dill then offered some practical suggestions for a "work around" on some of these types of issues especially for wireless microphones users, possibly involving the use of lesser know white space frequencies not currently being utilized today, and by designing new software/hardware modifications and manufacturing, as an alternative to just an across the board replacement of all wireless microphones at any given site.

A lively Q & A session followed, involving the 40 members/guests in attendance!