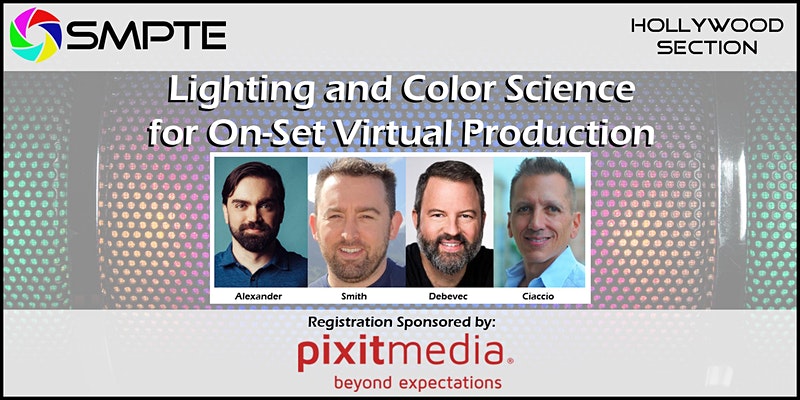 On-Set Virtual Production technology is generating considerable attention across the film and television industry as a means of placing talent into highly realistic virtual sets and backgrounds. On October 27, SMPTE Hollywood will host Lux Machina Consulting founder Zach Alexander, digital imaging and intellectual property consultant Michael D. Smith, and Netflix Director of Research, Creative Algorithms and Technology Paul Debevec for an insightful discussion of the technical and filmmaking challenges involved in OSVP, with an emphasis on lighting and color science. Creative technologist Greg Ciaccio will moderate.

Michael D. Smith has worked as a digital imaging and intellectual property consultant since 2003, including projects for Warner Bros., Sony Pictures Entertainment, DCI, NOAA, Dolby and DTS. He was co-editor of the JPEG 2000 High-Throughput image compression standard, published in 2019. In 2018, he received screen credit for his color science work on Mary Poppins Returns. From 2013-2015, he was co-chair of Blu-ray Disc Association's UHD-TF Video Subgroup which defined video-related requirements for Ultra HD Blu-ray disc. He was editor of the book 3D Cinema and Television Technology: The First 100 Years, published by SMPTE in 2011, and was named a SMPTE Fellow in 2019.

Paul Debevec is Netflix’s Director of Research, Creative Algorithms and Technology, overseeing the creation of new technologies in computer vision, computer graphics and machine learning for virtual production, visual effects, and animation. His 2002 Light Stage 3 system at the USC Institute for Creative Technologies was the first to surround actors with color LED lighting driven by images of virtual locations for virtual production. He is recipient of two Academy Awards for technical achievement and SMPTE’s Progress Medal. He is a Fellow of the Visual Effects Society and a member of the Television Academy's Science and Technology Peer Group, and has served on the Motion Picture Academy's Visual Effects Branch Executive Committee and Science and Technology Council, and as Vice President of ACM SIGGRAPH.

Greg Ciaccio, Creative Technologist, serves as Chair of the ASC Motion Imaging Technology Council’s Workflow Committee, which includes the Advanced Data Management and ACES Subcommittees. He also serves as Head of Production Technology for R&D Projects at the Entertainment Technology Center at USC, working to advance workflows and technical best-practices in Virtual and Remote Production. He is an ASC Associate Member, Board Member of the SMPTE Hollywood Section, Advisory Board Member of SMPTE Rapid Industry Solutions, Member of the Television Academy Science & Technology Group, and a founding member of the Digital Cinema Society.