How esports is attracting big audiences

Competitive video gaming has exploded on to the scene in recent years, attracting huge crowds across the world. Today, esports is the fastest growing forms of entertainment, attracting more viewers than Netflix, Hulu, HBO and ESPN combined. For this reason alone, it’s something that broadcasters need to watch carefully.

Viewers have an expectation from professional sports — highly skilled competitors playing against each other to the best of their ability with screaming spectators in huge arenas or watching from home or online on super-slick TV and streaming broadcasts.

Esports conforms to these expectations with only one point of difference; in esports, all the competition occurs in the virtual world of video games. Instead of balls and bats, esports competitors use joysticks and keyboards either individually or in teams. 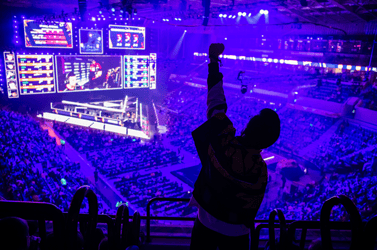 The other difference between esports and traditional sports is that you can play the same games as your heroes, even as a mere spectator. It’s the equivalent of playing baseball on a major-league field or shooting 18 holes at Augusta National. This makes esports really in a league of its own.

The technology used in creating a competition

To host an esports event, you need truckloads of hardware, monitors, servers, cables and the whole technological setup. Your infrastructure needs to be robust enough to support multiple monitors for players, referees and spectators, all broadcasting detailed video graphics in high definition. Plus, your servers need to cope with large groups of highly skilled players making moves that need to be played back in milliseconds. Lag is not an option, either for players or spectators.

Because of these massive requirements, on-premises technology is preferred for esports. Plus, on-premises solutions help esports venues keep tight security controls to prevent cheating and interference with gameplay.

The move to arena audiences

Though considered a new phenomenon, esports has been around longer than you might imagine. The first event that could be called an esports competition was held in 1972 at Stanford University for the game Spacewar, with a grand prize of a year's subscription to Rolling Stone magazine.

Televised video game events began to pop-up in the 1970s and 1980s. Still, it wasn't until the 1990s that the broadcasting of video-gaming competitions became big business with the popularity of highly competitive video games such as Streetfighter.

But like all popular sports, broadcasting isn't the whole story; it's all about getting bums-on-seats. And this has seen the rise of arena-based competitions where adoring fans pay to attend esports competitions, sitting in stands, eating hot-dogs and watching their favorite players on giant screens play-off against each other in slickly choreographed multimedia productions.

It's big dollars. Before the pandemic, the global esports market was forecast to hit $1.5b by 2020, with significant revenue streams in sponsorship, advertising, game publishing, media rights, and tickets and merchandise.

How it translates onto the small screen

Esports viewership is enormous. Teams compete in front of massive global audiences comparable in size to traditional top-tier sporting events. In 2014, the NBA Finals drew an average of 15 million viewers compared to more than 20 million people who watched the International Dota 2 Championships.

Because of the virtual nature of video games, some competitions allow users to not just view what a broadcaster chooses for you to see. They instead let viewers watch the game unfold from the competing player's point of view, or allow spectators to join the "field-of-play" and choose how they view the competition without disturbing the gameplay. You can literally feel like you're in the game itself instead of being a remote observer.

Examples in the market

Interested in viewing some esports events? Here are some of the biggest and most popular esports in the market today:

The worlds of cinema and TV saw profound transformations between 2010 and 2020. The movie business, while remaining relatively consistent at about 700 feature films a year... END_OF_DOCUMENT_TOKEN_TO_BE_REPLACED
Featured
|

Re-rendering and re-QC of a completed master program file prior to its broadcast is often needed due to late stage editorial changes required by program producers that... END_OF_DOCUMENT_TOKEN_TO_BE_REPLACED
Copyright © 2021 SMPTE. All Rights Reserved. Privacy Policy