Could Blockchain Be a Game Changer for Media and Entertainment?

As our digitally connected world continues to advance, it’s not without setbacks for many industries. Trust in social media continues to decline, content piracy is an ongoing issue, and the inability to properly track royalties across streaming services is growing. However, one system that many in the media and entertainment (M&E) industry believe is worth exploring to restore trust and mitigate (or completely resolve) these problems is blockchain.

Before highlighting how blockchain could change the game for M&E, let’s go over some quick basics.

The Basics of Blockchain

Blockchain is a secure, encrypted, digital distributed ledger that is chronologically time-stamped with unalterable data. Rather than being owned by a single entity or central authority (like a bank), it’s decentralized and shared with all parties in a given network. This allows peer-to-peer exchanges of value. Any transaction made is recorded, verified through a consensus method, and viewable by all participants.

Each “block” refers to a specific data structure — meant to keep all related transactions distributed to all users or computers (nodes) — within the network. The “chain” refers to an arrangement of blocks in a specified order.

Within each blockchain, there are three key components that make up the highly sought-after concept.

1. A Peer-to-Peer Network of Nodes
As mentioned previously, rather than having a centralized authority where information is controlled by a select few, blockchain operates under a decentralized, peer-to-peer network. Every participant in the blockchain network is in charge of maintaining, updating, and auditing the system, ensuring validity and security.

2. Cryptography
To anonymously secure and verify transactions (blocks), cryptography is used. Once a block is cryptographically sealed, it can no longer be copied, edited, or deleted. The data becomes immutable.

3. A Consensus Model
The consensus model explains how a blockchain is governed and operated, listing rules under which a new block can be added to the chain. Many different models exist, but the most common are Proof of Work, Proof of Stake, and Proof of Authority. These characteristics are especially favorable for the M&E industry because of the promise of data security, trust, and the ability to shift power back to copyright holders. So, here’s how it works. 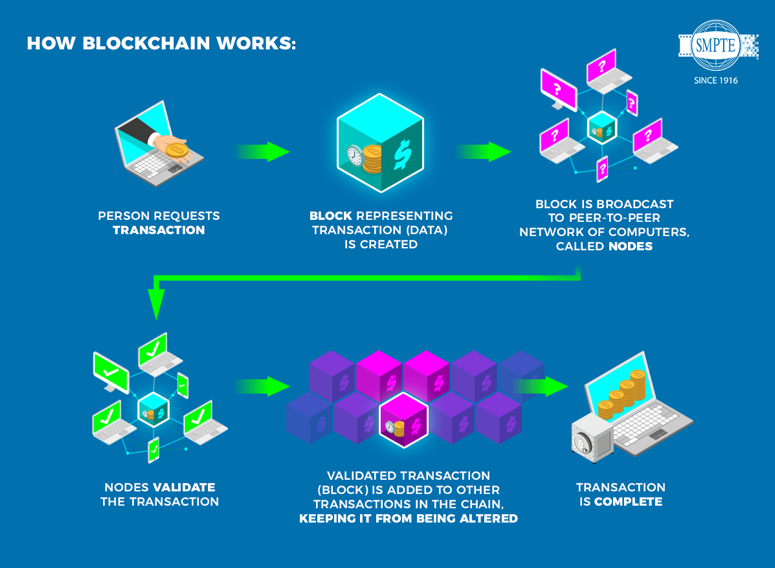 Once a blockchain system has been created, a transaction can be requested. After a request, a block representing the transaction, or data, is developed. From here, the block is broadcasted to the peer-to-peer network for verification. Once the block is verified, it gets added to the chain, sealing the data so it can’t be altered. Finally, the transaction is complete.

This decentralized, secure, immutable network poses many advantages for M&E.

Benefits for Media and Entertainment

With blockchain, a world of new possibilities could be opened for M&E. For example:

However, blockchain is still in the early stages of development and it would be some time before it could integrate with existing structures.

What do you think, will blockchain be a game-changer for media and entertainment?

Some information in this blog was derived from the September Motion Imaging Journal Article, ‘Blockchain in Media — A True Calling?’ To read it, get your hands on this month’s journal!

Heiko Sparenberg, Head of the Digital Cinema group at Fraunhofer IIS in Germany, presented a paper co-authored by Siegfried Foessel on "A Concept for a File Based Content... END_OF_DOCUMENT_TOKEN_TO_BE_REPLACED
HD
|

ETCA 2016: The Future of Home Entertainment in a Connected World -- A Warner Bros. Perspective

The conference's Day 2 keynote was given by Ron Sanders, CEO of Warner Home Entertainment, in the form of an interview conducted by  EnGadget's Roberto Baldwin. Ron started... END_OF_DOCUMENT_TOKEN_TO_BE_REPLACED
ETCA2016
|

ETCA 2016: Entertainment on the Road -- The Connected Car

Just as an increasing amount of content is being consumed on mobile devices, so too is the car a growth market for entertainment -- although one that has its own unique... END_OF_DOCUMENT_TOKEN_TO_BE_REPLACED
Copyright © 2022 SMPTE. All Rights Reserved. Privacy Policy